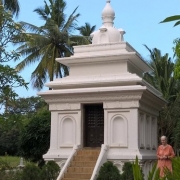 Situated in the coconut grove by the Adyar River, not far from the Headquarters building, is the Buddhist shrine.  It was built in 1925 under the direction of Mr C. Jinarajadasa, and enshrines a gray sandstone image of the Lord Buddha from Eastern India. Just opposite is a lotus pond and the bodhi tree as well as a Zen memorial stone which was unveiled in 2009. 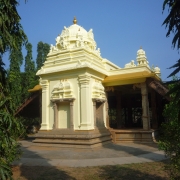 This architecturally beautiful, non-sectarian Hindu shrine called the 'Temple of Light' contains no idol, only a flame.  Here at sunrise every morning a small band of devoted worshippers gather to perform the 'Bharata Samaj Puja'. 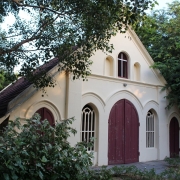 Church of St Michael and All Angels

This is an attractive, well-appointed non-sectarian church where services according to the rites of the Liberal Catholic Church are held on Sunday mornings and other important days.

Not far from the Hindu temple is the Zoroastrian shrine. The figures are Assyrian in origin deeply symbolic and are deserving of reflection. 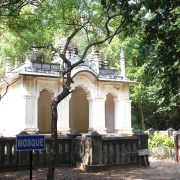 The Mosque was completed in 1937.  It was modelled on the famous Pearl Mosque at Agra. It features the simplest of all interiors or all the shrines in accordance with the Islam teaching that the ONE Supreme is beyond representation. 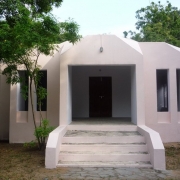 The Sikh Shrine was built in 1978 and is one of the most recent places of reverence. It has a small and simple prayer hall which symbolises the direct path to the Divine.