Tallapragada Subba Row (1856–90) was an outstanding member of The Theosophical Society in its early years in India. Madame H. P. Blavatsky had originally planned to collaborate with him in the production of The Secret Doctrine, but this plan did not bear fruit.  Col. H. S. Olcott’s tribute to Subba Row was that,

‘there was none equal to him in bright genius for grasping the spirit of the Ancient Wisdom’.

Subba Row’s philosophy was essentially Vedântic, although he was also greatly stimulated by the Theosophy of Madame Blavatsky.  He was highly respected for his wide-ranging erudition and knowledge of esoteric philosophy and practice, and was one of the most outstanding Hindu members of the early Theosophical Society.

Tallapragada Subba Row was born on 6 July 1856 at Kakinada in Godavari District, Andhra Pradesh.  He belonged to a family of distinction, his grandfather being the Sheristadar of the District and his maternal uncle, the Prime Minister to the Raja of Pithapuram.  The infant Subba Row lost his father when he was six months old and was brought up by his uncle.  In 1869, he and his mother accompanied his uncle and aunt on their pilgrimage to Benares (now Varanasi).  During the religious activities of the elders, young Subba Row disappeared for a number of hours.  When questioned, he stated that he had met a yogi who initiated him into Brahma Vidyâ, and from that time onwards he performed the prescribed daily prayers and meditation.  He was a precocious child and showed early signs of a prodigious memory and intelligence.  After attending the Hindu School in Kakinada, he passed his matriculation examination, entered Madras Presidency College in 1872, where he proved to be an excellent student, and in 1876 qualified for the degree of Bachelor of Arts.

Later that year he was appointed Registrar of the High Court in the state of Baroda, in present day Gujarat, where Sir T. Madhava Rao was the Prime Minister.  After a year he returned to Madras (now Chennai) where he continued his studies and passed the Bachelor of Law examination.  He joined the legal firm of Grant and Laing and was enrolled as a Pleader of the High Court in the latter part of 1880.  He practised law for ten years, appearing in important cases, and was held in high esteem both by the Bench and by the Bar.  He also took an active part in public life even as a student and was a member of many organizations such as the Triplicane Literary Society.  It is significant that some of the members of this Literary Society founded the Madras Mahajana Sabha, the precursor of the Indian National Congress, in 1883.  Mr Row’s legal practice became lucrative and he would without doubt have become a prominent attorney or a statesman, being deeply interested in social and political affairs, had he not diverted his attention to philosophy.

Madame H. P. Blavatsky and Colonel H. S. Olcott who founded The Theosophical Society in America in 1875, published a widely circulated magazine, The Theosophist, which contained articles about occultism and the various religions and philosophies of the world.  Subba Row corresponded with the two leaders and contributed some valuable articles on Hindu religion and philosophy to their magazine.

He joins The Theosophical Society

HPB and Colonel Olcott had established themselves since 1879 in Bombay, where they were joined by Damodar Mavalankar and a nucleus of members.  A correspondence began between HPB and Subba Row which eventually led to his joining The Theosophical Society on 25 April 1882.  Col. Olcott also mentions in his Old Diary Leaves that they chose Adyar as their permanent Headquarters mainly because of his presence at Madras.

Subba Row had written to HPB on 3 February 1882 that he thought it highly desirable that they should go to Madras.  He received the Founders and their party on 23 April 1882 when they arrived by boat from Calcutta (now Kolkata).  The Madras Theosophical Society was formed with R. Raghoonath Row as President, and Subba Row as Secretary.

An interesting fact is that till the time Subba Row came into contact with the Founders he was unaware of the occult knowledge he possessed. Colonel Olcott writes:

'It was as though a storehouse of occult experience, long forgotten, had been suddenly opened to him; recollection of his last preceding birth came upon him . . . . His stored-up knowledge of Sanskrit literature came back to him, and his brother-in-law told me that if you would recite any verse in the Gitâ, Brahma-sutra-s or Upanishads, he could at once tell you whence it was taken and in what connection employed.'

Subba Row assisted the Founders in their Theosophical work through his articles and for some time as Editor of The Theosophist.  He also served on a number of committees, including the General Council.  During the annual Convention in 1885, he delivered an introductory lecture and in 1886 a series of four lectures on the Bhagavadgitâ, which later were brought out in book form.

Subba Row’s deep knowledge of the ancient scriptures of India and his occult understanding were such that he was originally selected by the Adepts to help HPB in the writing of her monumental work The Secret Doctrine.  At that time, in 1884, it was intended to become a new version of Isis Unveiled with Subba Row writing most of the commentaries and the explanations.  However, in January 1885, a new plan for The Secret Doctrine was formulated.  HPB went to work on it and sent portions of the first draft to Subba Row for his opinion and corrections. He, however, refused to edit it or help with the writing as he found the text both diffuse and chaotic.  Nevertheless, so great was HPB’s respect for her uncompromising critic that she started the whole work over again from the beginning.  This no doubt contributed to the eventual success of her magnum opus.  Another reason for Subba Row’s refusal was that he believed the world was not yet ready for the disclosure of those secrets which had been, for good reason, kept within the knowledge of the sacred few till then.

A controversy between HPB and Subba Row regarding the classification of man’s principles had been printed in The Theosophist.  HPB presented the teachings of the trans-Himalayan School on the sevenfold constitution of man, whereas Subba Row held that the Târaka Râja Yoga’s fourfold classification was more logical.  This discussion between two occultists of unquestioned status is one of the most brilliant of its kind.  In 1886 Subba Row resigned from the Society when an appeal was made to HPB by forty-five prominent members of the American Section headed by W. Q. Judge to publish The Secret Doctrine immediately.

But Subba Row kept in touch with Adyar and read Theosophical books and journals.  He spoke about HPB in the old friendly manner whenever he had an opportunity to chat with Col. Olcott and his former friends in Adyar.

Subba Row was greatly admired not only by his countrymen in the Society, but also by the foreigners at the Adyar headquarters.  He was a representative of the Sringeri Math at Madras, and as such, had considerable influence among the orthodox Hindus.  His literary output is rather limited, considering his vast learning and the facility for writing that he possessed, but everything from his pen is worth reading.  His anxiety that nothing of an esoteric nature should be divulged to the uninitiated may account for his apparent unwillingness to commit to writing his vast knowledge in such matters.

Subba Row’s literary output was stimulated when he joined The Theosophical Society and took an active part in its work.  His first essay was on ‘The Twelve Signs of the Zodiac’ in which he explains the esoteric and spiritual significance of the signs, and relates them to the forces in nature and the cosmos.  This article arrested the attention of HPB and she quoted from it in The Secret Doctrine.

Subba Row wrote articles, reviews, answers to questions and rejoinders to critical articles for The Theosophist, of which he was the editor for some time.  These articles were first published in book form in 1895 under the title A Collection of Esoteric Writings of T. Subba Row by the Bombay Theosophical Publishing Fund, founded chiefly by Mr Tookaram Tatya.  An enlarged second edition was brought out by the Theosophical Publishing House in 1931 to which C. Jinarâjadâsa added a selection of unpublished papers collected from notes taken by Judge Subramania Iyer who was also a friend of Subba Row.  Subba Row had a group of pupils or personal friends who, as the ‘chosen few’, were given private instruction.   Among them were Sir S. Subramania Iyer, Mr C. W. Leadbeater, Mr A. J. Cooper-Oakley and Dr Neil Cooke.  In 1925, C. Jinarâjadâsa discovered another copy of the notes in the archives of the Welsh Section, which were more complete.

A series of lectures entitled Notes on the Bhagavadgitâ is the only work by Subba Row which stands as a unity.  They were delivered at the annual Convention at Adyar in December 1886.  He revised them before they were published as a book by the Theosophical University Press, Point Loma, California, USA.  These talks were deeply scholarly and mystical and brought him fame.  Madame Blavatsky quotes extensively from this book in The Secret Doctrine, particularly in her notes on the term mulaprakriti and in her explanation of the significance of numbers and avatâra-s.

In spite of their differences , HPB, writing of Subba Row, declared:

‘We know of no better authority in India in anything concerning the esotericism of the Advaita Philosophy.’

Subba Row’s last visit to Adyar was in April 1890, since the mysterious cutaneous disease to which he ultimately succumbed had begun to show itself.  Though no one suspected it to be serious he had to keep to his room and was unable to go anywhere, save once when he was taken to a different house for a change of air.  At his request Col. Olcott went to see him in June; he was in a serious condition and asked the Colonel to help him with mesmerism.  It seemed to make a difference since he started to recover from that day.  He even seemed to be convalescent by Col. Olcott’s third visit but, unfortunately, there was a relapse soon after and the disease finished its course rapidly.  On 24 June 1890 he passed away, only thirty-four years old.

The fund was started in 1884, the first donation being Rs 100.  The Medal was awarded to Mr P. Sreenivasa Rao in 1885 and to Madame Blavatsky in 1888.  At the Convention of 1891, it was decided that the award should be made to the author of the most valuable contribution of the year to Theosophical Literature, either by translation into English or as an original composition.  However, awards were not made until 1895 when Annie Besant was honoured with it.  Since then many stalwarts like Rudolf Steiner (1909), J. Krishnamurti (1911), C. Jinarâjadâsa (1913), Ernest Wood (1924), Bhikku Arya Asanga (1943), N. Sri Ram (1951), Geoffrey Hodson (1954) and Virginia Hanson (1990) have been recipients for their valuable contributions. 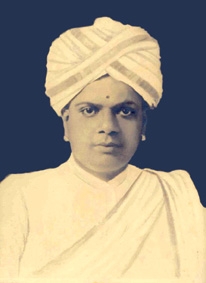