All of our people and the TS campus at Adyar are OK, and The International Convention will be taking place as scheduled.

Free lunches for all workers were served at Bhojanasala every day until 29 December, 11:30am-12:30am.

Teosophical Order of Service helps, you may help too. Read how...

5 Dec 2015: During these historic rains and flooding in the city of Chennai, we were affected by some flooding of the ground floors in a couple of houses, but the damage was minimal. Although the water level from the Adyar River was significantly higher than the 2004 tsunami, none of the major buildings were affected. Many workers living in outlying communities lost everything. Preparation for the upcoming convention has been affected. Many businesses are just reopening and many Adyar workers are just now able to come to work, and the convention will be taking place as scheduled.

In a normal year the monsoon in Chennai comes and goes predictably. October 15th to December 1st are the dates longtime residents will tell you to expect the rains. It is an important time because historically it accounts for 65% of the annual rainfall.

This year the monsoon came late. Throughout the month of October there was little rain. People at Adyar were worrying that we would not receive enough rain this season to recharge the wells that supply the campus water. With the international convention approaching, providing for the 1000 members who attend was becoming a concern.

On November 9th the first of two slow moving tropical depressions swept over the area dropping record amounts of rain and flooding large areas of the city. The TS Adyar campus was inconvenienced, but largely unaffected by the storms. Having replaced the 45 year old back up generator a year ago, the frequent power outages were manageable.

Early in the morning of December 1st the rains started. Throughout the day it increased in intensity. By day's end the city of Chennai had received more than 19 inches of rain. The ground was already saturated and the infrastructure completely inadequate. The result was massive flooding. This time the TS campus was not spared. To add to the hardship three area lakes that have been dammed to provide hydroelectricity released massive amounts of water in an attempt to relieve the stress on the dams. All of that water flowed into the Adyar River. The river rose several feet, overflowing its banks and engulfing two of the main bridges connecting North and South Chennai.

During this time the School of the Wisdom was being conducted with 20+ members from around India, but also from Australia, Finland, Argentina, Canada, and Slovenia. We also had visitors from Mexico and Australia, who had come to Adyar for a day or two. On December 1st it was announced that the Chennai airport was under water and would not be open until the 6th. Railway service to the city was cut off. Roads into and out of Chennai were blocked. Hundreds of thousands of residents had to evacuate their homes. The entire city lost electric power. Phone service was spotty and internet was a distant memory.

In 2004 when the tsunami hit Chennai the TS campus was not severely threatened. At that time the water came up to Leadbeater Chambers, the coconut grove was flooded, but the Headquarters building was untouched. This time the river rose right up to the building. Although it was unlikely that the river would overwhelm the Headquarters building, in the Archives which is on the first floor, the staff took the precaution of moving everything from the lower shelves, either to another floor of the building, or to higher shelves.

On the other side of the wall that separates the TS campus from the surrounding area, an area called Urur Village, the waters were rising dramatically. In an attempt to relieve the build up of water the villagers broke holes into the bottom of the ten foot high stone walls. The result was a river of water surging through the coconut grove to the Adyar River, and flooding neighboring campus houses with a mixture of water and sewage. Arundale House was surrounded with water, as was the vice-presidents home.

At Adyar we were able to provide intermittent electric power. In order to conserve the fuel that powers the generator, specific hours were established when power would be available. On the evening of December 3rd the generator failed. Living in darkness was not difficult. The real problem was that we needed electricity to pump and to purify our water. The next day was a scramble to come up with solutions. Power was starting to be restored to specific areas around the city. Our General Manager, Harihara Ragavan, contacted the local Electricity Board and arranged for them to provide power to the area for a brief two hour window which allowed us to recharge water, phones, computers, etc. By the evening of December 4th power had been restored.

Right now the campus and the city are returning to normal. With less than three weeks to prepare for our Annual Convention and workers, local businesses, and suppliers stressed by the recent calamity, we find ourselves racing against the clock. 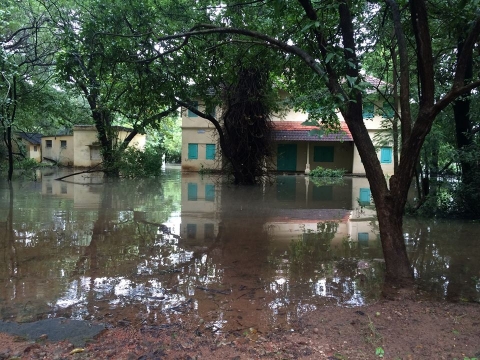 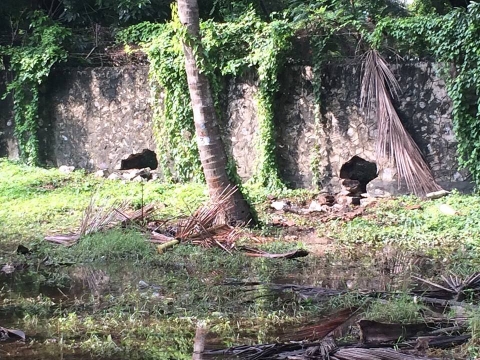