The Theosophical Influence on the paintings of Mrs Florence Fuller

At the age of 38, in 1905, she became a member of the Theosophical Society and ever since dedicated to it. In 1908 Fuller left Western Australia and travelled to India, staying at Adyar. Of her time in India, Fuller wrote:

"I went in search not only of beauty, and light, and colour, and the picturesqueness in general, which delight the eye and emotions of all artists—but of something deeper—something less easily expressed. I spent two and a half years in a community that is quite unique—perhaps the most cosmopolitan settlement in the world—the headquarters of the Theosophical Society ... Well, I painted there, of course, but my art was undergoing a change, and I felt that it could not satisfy me unless it became so much greater." 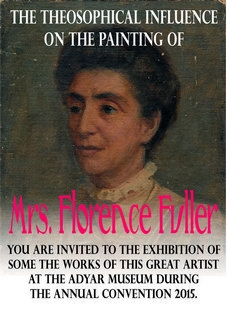