Khana Bawa Lodge departed on 18 March 2019 to be a Lodge attached to Adyar. On 22 January 2022, the Lodge was reincorporated into the Bolivian Agency.

On December 23, 2018 Section status was withdrawn and Bolivia was made a Presidential Agency with Mrs Sonia Montecinos Rojas being appointed a Presidential Representative.

The TS in Bolivia, with 113 members and 11 Lodges, became a Section in 2015 after functioning as a Presidential Agency for 50 years. It has headquarters in La Paz, Cochabamba, and Santa Cruz.

The Founding meeting was held in January 2015, with Presidents and members of all their Lodges. Mrs Guillermina Ríos Sandoval was elected General Secretary in 2015.

In 1964 it became a Presidential Agency, when then President N. Sri Ram appointed Mrs Teresa Wayar de Nuñez as Presidential Representative. And as we read above, after 50 years it became a Section and has a General Secretary.

The beginning of theosophical activity in Bolivia started in 1914, when Lodge La Paz was founded. 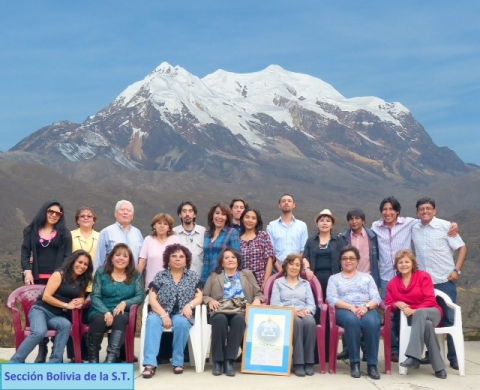