Science and Spirituality in the light of Theosophy
Delivery:
In-Person

The 2009 International Convention of The Theosophical Society had an attendance of almost 1,300 members, mainly from India, with a number of participants coming from several other continents.   Professor Ramachandra Guha eloquently delivered the Besant Lecture in the form of a highly informative review of the role Mahatma Gandhi had played in the building of India as a nation.  The lecturer focused his talk on the unique individual religious experience of this national hero and mentioned that Gandhi's best friend was a Catholic clergy man, Charles Freer Andrews.

Six short lectures, three public lectures, the Theosophy-Science lecture and the lecture by the International President made for a rich variation in presentation and insights which were shared with the participants.  In between the lectures it was good to see groups of members sitting on the grass in front of the Headquarters building discussing the contents of the day's presentations.

The lecture by the International President, Mrs Radha Burnier, was an inspiring message about brotherhood and the work of the TS which came straight from her heart and made it clear to everybody that she had completely recovered from her earlier illness.  In the Theosophy-Science lecture, Dr Madhav Kolhatkar gave a beautiful explanation on the nature of meditation which could be understood and appreciated by everybody.

During the Convention there was a particular atmosphere of harmony in which also the other kingdoms of nature seemed to participate.  Sometimes a lovely dog would pass in front of the stage in a gracefully dancing manner.  At other moments the birds participated with loud voices and, depending on the type of lecture given, the crows would make their noisy comments, the parrots would apparently agree with them while sometimes a choir of singing birds would arrive on the pandal's palm leaf rooftop and start to hail and praise with beautiful voices.

The accommodation at Adyar is excellent and the estate is kept in good condition.  While the organization of the Convention was without any visible problems together the participants could experience how brotherhood is expressed in a positive way.

New acquaintances were made and existing contacts were renewed during these six days which seemed to last forever and be over before we knew it when the last day had arrived.  In this true experience of peace and harmony it seemed that time stood still and the voice of the silence could have its most beneficent influence on the individual as well as on The Theosophical Society and humanity as a whole.  Now, after this uplifting experience, we shall go on and follow the advice of a Great Sage to go, go, go on, go on together, be amazed, and let it be.  AUM. 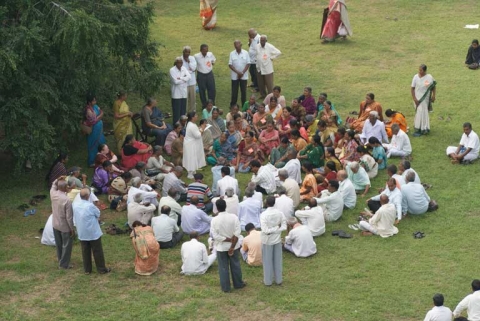